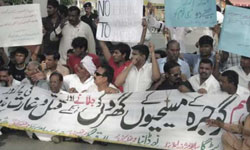 Around eight people have died, including one child, and many were injured in the violence that engulfed the Gojra, Punjab. Following the allegation by some local Muslims on Friday that some Christians have desecrated the Holy Quran, a violent mob burned down 70 houses belonging to the Christians to ashes in riots that went on for two days. On Saturday, a violent mob attacked the Christians community which resulted in eight deaths and ten injuries. According to many eye-witnesses interviewed on various television channels, the attacks were conducted in a very organized manner. The government has completely failed to control the situation and take any stern action against the perpetrators of violence.